Under this write-off, small business entities ($10 million threshold for 2017 onwards) will have the benefit of the $20,000 instant asset write-off for most new or second hand depreciating assets bought and used, or installed ready for use, in the business in the 2017 (and now 2018) income tax year.

A SBE that acquires business assets (e.g. cars, vans, machinery or kitchen equipment) for less than $20,000 (on a cost per asset basis) for the first time after 12 May 2015, may write-off the business use proportion of an asset in the income tax year in which the asset was first acquired and used or installed ready for use.

Therefore, assuming a SBE buys a $22,000 machine which is only used 80% of the time in the business, the $20,000 instant asset write-off would not be available even though the business use proportion would be only $17,600 ($22,000 x 80%).  The $17,600 business use proportion amount will be included in the general small business (depreciation) pool and depreciated accordingly (see below).

Should GST be included in working out whether the $20,000 instant asset write-off threshold is met?

An immediate deduction is available for amounts less than $20,000 spent on improving or transporting a depreciating asset5  (provided such costs are incurred between 12 May 2015 and 30 June 2018).

Assets costing $20,000 or more do not qualify for this immediate deduction – instead, the whole amount will form part of the general small business depreciation pool.

The diagram below sets out a methodology to apply when depreciating assets in the general small business depreciation pool for the following two practical examples:

(A) Immediate deduction because calculation result (i.e. balance before depreciation) < $20,000 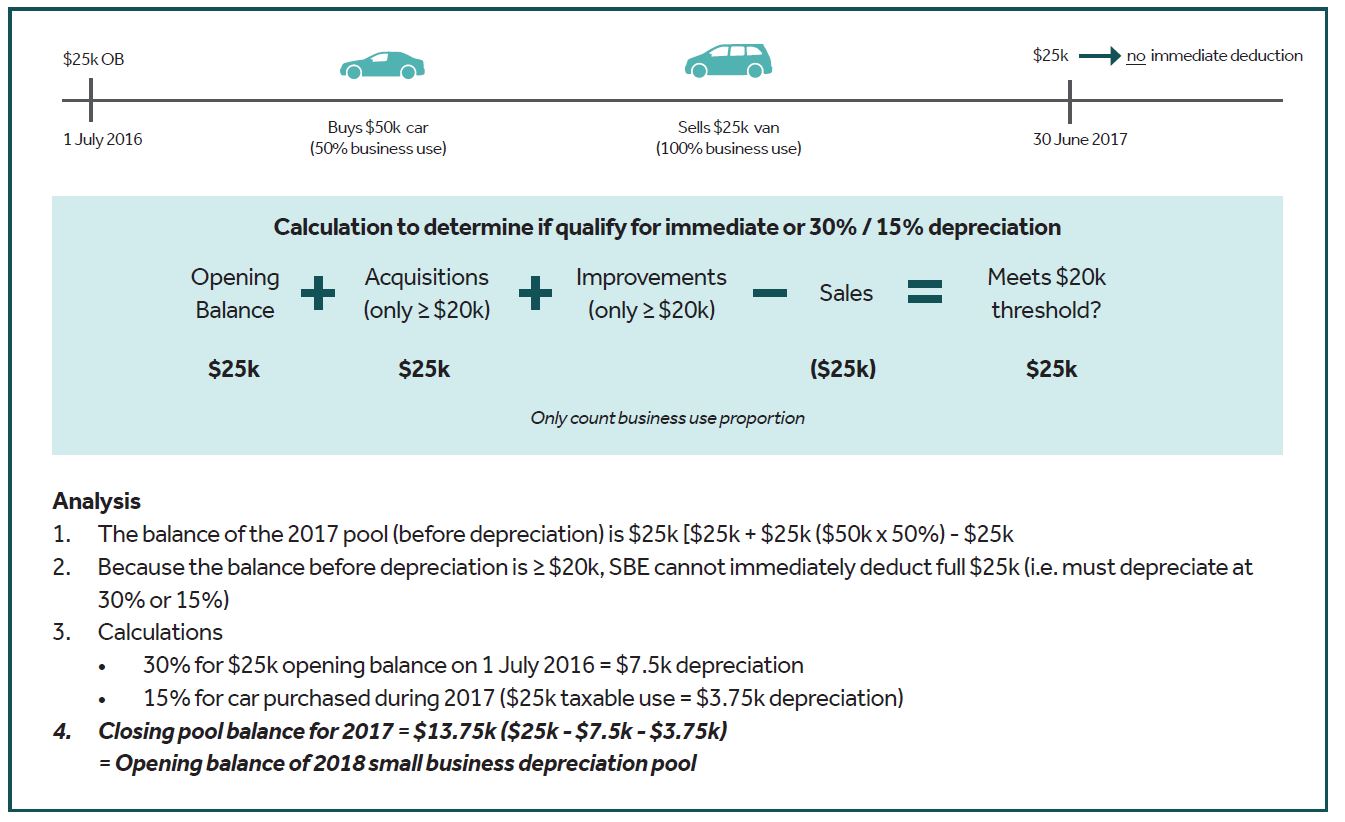 Therefore, if the closing balance of the pool (before depreciation) is $20,000 or more, the taxable purpose proportion will be depreciated:

Once the closing balance of this pool falls below $20,000, the balance can be immediately deducted in that year (regardless of when the assets were purchased6).

Effect of the Small business entity threshold increase to $10 million

As the timeline below illustrates, the SBE threshold has increased to $10 million from 1 July 2016 onwards.7

(1) Effect on the test for a small business entity

The interaction of the SBE threshold change as well as the 3 different SBE tests can produce some interesting results.

The example below illustrates that: 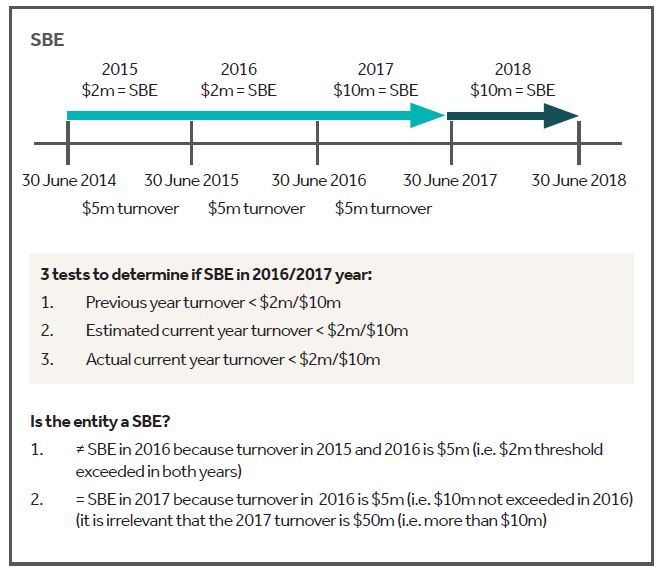 However, because the entity will be a SBE in 2017 (because the $5 million turnover in 2016 is less than the 2017 SBE threshold of $10 million) the instant asset write-off and small business depreciation pooling rates should be available for the SBE in the 2017 income tax year8.

Practically this will mean that in the 2017 income tax year, the SBE can choose9:

How can Nexia Edwards Marshall NT help you?

However, Treasury has warned that that they are checking assets acquired under artificial or contrived arrangements (e.g. where a number of related SBEs sell their assets to one another and write off the full value of those assets under the increased threshold).

We would be happy to assist you with your depreciation claims on any business assets you may have acquired – to ensure you gain the maximum deduction possible.

With the increase of the SBE threshold to $10 million from the 2017 income tax year, additional opportunities exist for entities with turnovers between $2 million and $10 million.

Please speak to Sarah McEachern or your Nexia Edwards Marshall NT Advisor if you would like to know more about how these small business measures may assist your business.

At the time of last year’s Budget, allowing ourselves the indulgence of thinking about a post-pandemic world was perhaps a … Continued